What To Expect From a Dryer Vent Cleaning Near Me in Central West, NJ

Doing laundry is easy, so you often don’t think about it. You run the clothes through the washer, put them in the dryer, dry them, clean out the lint trap, then you don’t have to worry about it until you add in the next batch of clothes. You go through this process weekly, sometimes daily, so you know what to do. However, you should never get too comfortable when doing anything, and that includes the laundry.

When was the last time you searched for a “dryer vent cleaning near me” to find a professional to care for your dryer vent? Many people don’t think about their dryer vent. After all, they clean out their lint trap after each load of laundry they do in their Mercer County home. That’s enough, right?

Unfortunately, ignoring your dryer vent can have dangerous consequences. But when do you need a dryer vent cleaning in Central West, NJ, and what should you expect? Below, Apex Air Duct Cleaning and Chimney Services has created a guide to vent cleaning. You’ll learn why you need to clean your dryer vents, when, the benefits, the process, and how you can clean them. Keep reading below to learn more about this essential chore.

Why Do You Need a Dryer Vent Cleaning?

If you’ve never had dryer vent cleaning done in Mercer County, you may wonder why you need to clean your dryer vent. Think about how much lint your lint catcher sees with each wash. Now, consider how much your dryer vent must catch. If you fail to clean it, that lint can build up in your vent.

That may not seem like a problem at first, but lint is flammable. When you let the lint clutter, you can risk a fire starting in your dryer vent. This is because lint isn’t the only thing that goes through the vent; moisture and hot air also go through it. Nobody wants to lose their home, especially to a preventable house fire.

Fires aren’t the only safety hazard posed by uncleaned dryer vents. As we mentioned, moisture also leaves the dryer and goes through the dryer vent. Therefore, mold can grow inside the vent. Also, clogged vents can keep other things from going through, such as carbon monoxide. This can cause the gas to stay in your Central West, NJ home, potentially causing carbon monoxide poisoning.

When a dirty dryer vent can cause so many issues in your home, you need to take care of it and clean it properly.

Also, you know you need to clean your dryer vent if your clothes smell musty after coming out of the dryer. Excess lint in your lint trap can also signify that you need a dryer vent cleaning. Finally, if your dryer or clothes feel unusually hot, call Apex Air Duct Cleaning and Chimney Services immediately.

There are many benefits other than safety that you can reap when you turn to a professional for a dryer vent cleaning in Central West, NJ. A clean dryer will always work better than a dirty one. Therefore, it won’t take as long to dry your clothes, your dryer will last for longer, and you can conserve energy. When your dryer doesn’t work at full capacity, it takes more energy to do one load of laundry. Therefore, cleaning your vent can save you energy and money.

You can see many benefits immediately when you choose to get a dryer vent cleaning done in Mercer County. 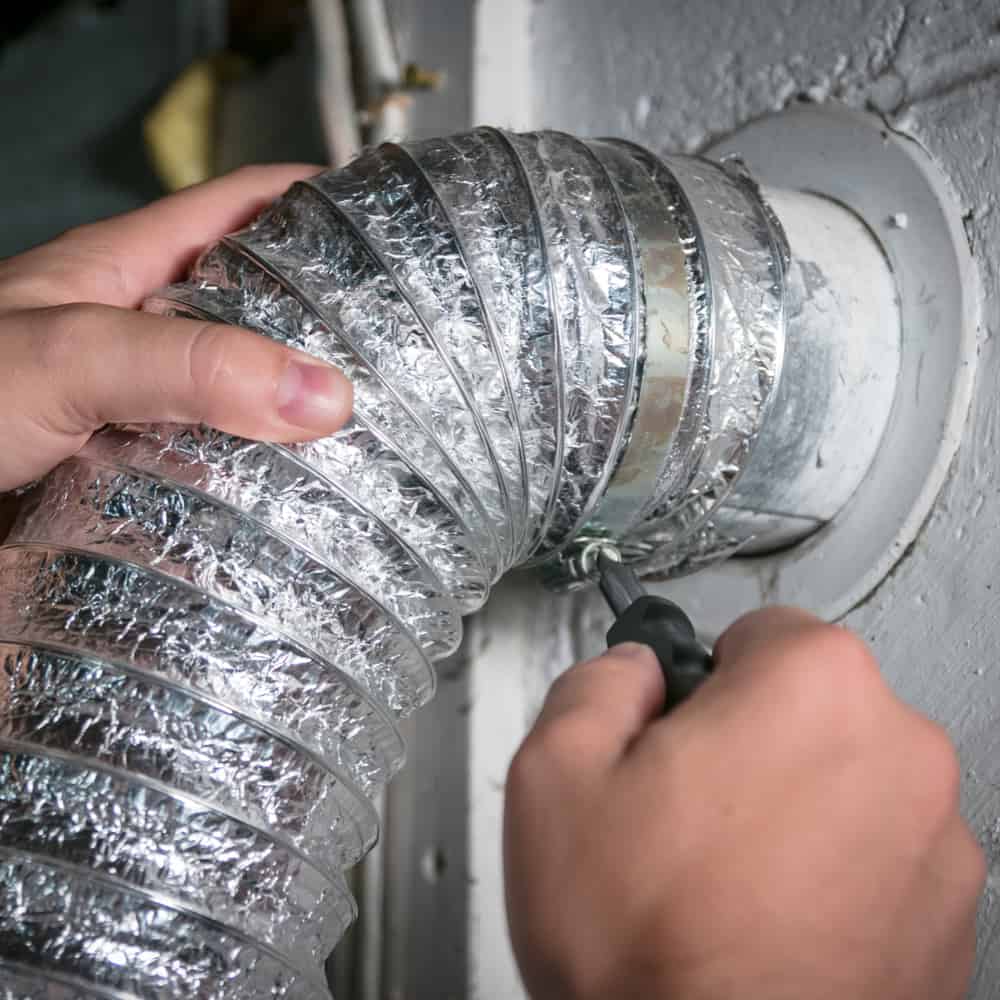 Can You Do It Yourself?

Do you need to hire a professional dryer vent cleaner, or can you do the job yourself? Yes, you can clean your Central West, NJ dryer vent. In fact, you should inspect it often and clean it out whenever you notice a buildup forming.

However, there are some times where you need to hire professionals.

Why You Should Hire Professional Dryer Vent Cleaners

When do you need to turn to professional dryer vent cleaners, like Apex Air Duct Cleaning and Chimney Services? Imagine you have an issue with your car. There are some problems, like needing a tire changed, that you can do on your own. However, if you don’t have thorough knowledge or education, you can’t perform more complex tasks. The same goes for your dryer vent.

When you choose a professional dryer vent cleaning company in Mercer County, you ensure they do the job right. They know what to look for, and they have all the tools they need. When lint buildup is so dangerous, you don’t want to mess around and do the job yourself.

Once you call the professionals, though, what do they do? The dryer vent cleaning professional will first locate your dryer cap. In some cases, this can be in your ceiling or on your roof. They will then insert a vacuum to suction out the lint. They will also use a brush to remove any stuck-on lint.

Once they finish cleaning your vent, they will have to inspect it. Lint can buildup and hide in bends, so they need to thoroughly inspect the dryer vent to ensure they don’t leave any lint behind. In some cases, they may need to run diagnostic testing. With this testing, they can determine how much pressure passes through the vent and how much gas enters your home.

While you can do some of this scrapping on your own, professional dryer vent cleaners may have to climb onto your roof to clean out any blockages. Therefore, you want to leave that job to the pros.

How Often Should You Have It Cleaned?

So how often should you have it cleaned? How often you need to clean your dryer vent depends on many factors, such as how often you use your dryer and the size of your household. Typically, you should clean it at least once a year. However, you should call someone immediately if you notice any of the signs of a blockage that we mentioned above.

Have you opened Google lately, searching for “a dryer vent cleaning near me?” It’s time to put down your computer and pick up your phone. Call Apex Air Duct Cleaning and Chimney Services at 732-314-7171 today. We will keep your home safe, so all you have to worry about is getting your laundry done on time.

Some information about Central West, NJ

Trenton is the capital city of the U.S. state of New Jersey and the county seat of Mercer County. It briefly served as the capital of the United States in 1784. The city’s metropolitan area, consisting of Mercer County, is grouped with the New York Combined Statistical Area by the United States Census Bureau, but it directly borders the Philadelphia metropolitan area and was from 1990 until 2000 part of the Philadelphia Combined Statistical Area. As of the 2010 United States Census, Trenton had a population of 84,913, making it the state’s 10th-largest municipality after having been the state’s ninth-largest municipality in 2000. The population declined by 490 (-0.6%) from the 85,403 counted in the 2000 Census, which had in turn declined by 3,272 (-3.7%) from the 88,675 counted in the 1990 Census. The Census Bureau’s Population Estimates Program calculated that the city’s population was 83,203 in 2019, ranking the city the 413th-most-populous in the country.

The earliest known inhabitants of the area that is today Trenton were the Lenape Native Americans. The first European settlement in what would become Trenton was established by Quakers in 1679, in the region then called the Falls of the Delaware, led by Mahlon Stacy from Handsworth, Sheffield, England. Quakers were being persecuted in England at this time and North America provided an opportunity to exercise their religious freedom.

By 1719, the town adopted the name ‘Trent-towne’, after William Trent, one of its leading landholders who purchased much of the surrounding land from Stacy’s family. This name later was shortened to ‘Trenton’.

During the American Revolutionary War, the city was the site of the Battle of Trenton, George Washington’s first military victory. On December 25–26, 1776, Washington and his army, after crossing the icy Delaware River to Trenton, defeated the Hessian troops garrisoned there. The second battle of Trenton, Battle of the Assunpink Creek, was fought here on January 2, 1777. After the war, the Congress of the Confederation met for two months at the French Arms Tavern from November 1, 1784, to December 24, 1784. While the city was preferred by New England and other northern states as a permanent capital for the new country, the southern states ultimately prevailed in their choice of a location south of the Mason–Dixon line. On April 21, 1789, the city hosted a reception for George Washington on his journey to New York City for his first inauguration.