4 Reasons Why Regular Air Duct Cleaning is So Important for Your Camden, NJ Home

For more than 40 years, Camden County homeowners have been relying on Apex Air Duct Cleaning and Chimney Services for all of their air duct cleaning needs. What began as a one-man operation in 1975 has blossomed into the most reliable Camden, NJ air duct cleaning company. The technicians at our locally owned and operated, fully licensed and insured company are certified by the Chimney Safety Institute of America (CSIA) and adhere to the stringent duct cleaning standards that have been established by the National Air Duct Cleaners Association (NADCA). Using the most advanced technologies and proven techniques, we’ll make sure that your air ducts are thoroughly cleaned and that your HVAC system is running as safely and efficiently as possible. For the most reliable, efficient, and affordable duct cleaning services in Camden County, look no further than Apex Air Duct Cleaning and Chimney Services.

Why You Should Invest in Routine Duct Cleaning Services for Your Camden, NJ Home

Of all the systems appliances and systems in your home, the HVAC system is one of the most important. It keeps you cool in the summer, warm in the winter, and keeps the air circulating all year long. In other words, the HVAC system maintains the comfort of your Camden County home – and everyone inside of it. 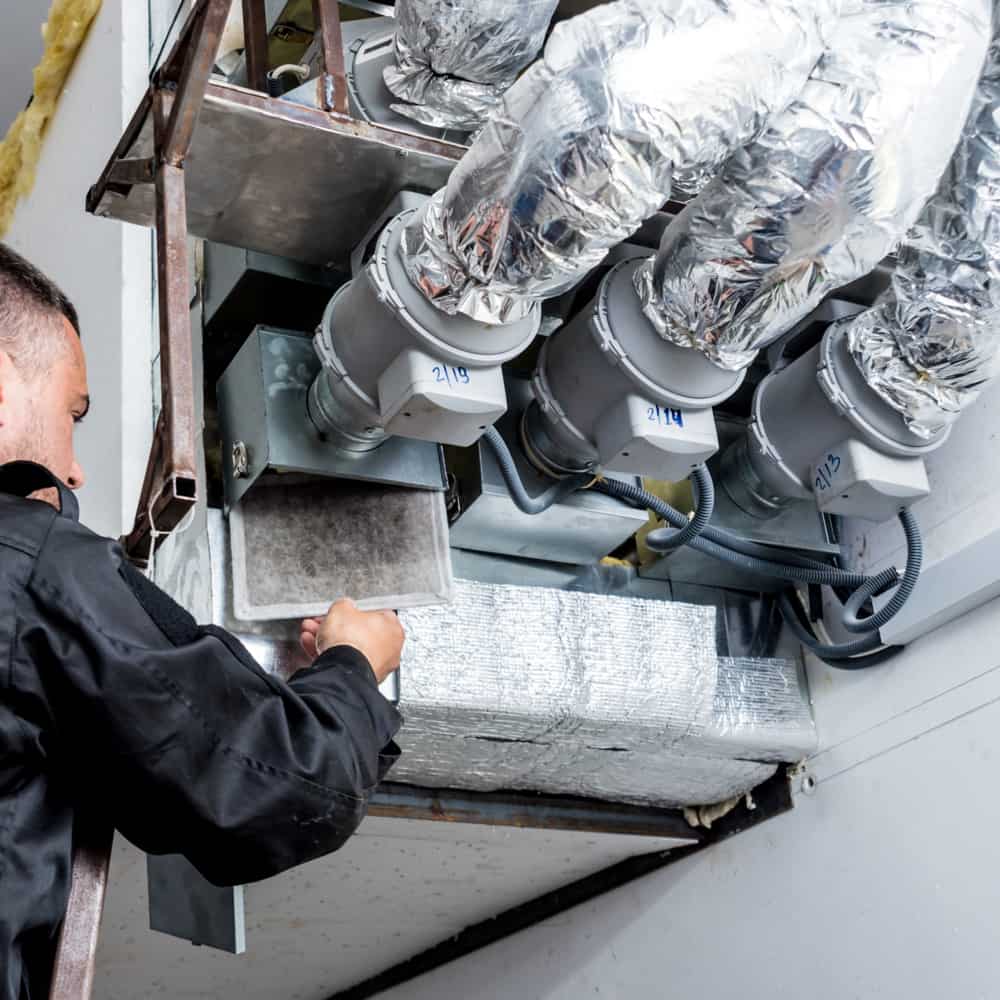 Since it runs pretty much year-round, your home’s HVAC system takes a serious beating; particularly the ductwork. The air ducts are to a heating and cooling system what the lungs are to your respiratory system. Just like your lungs, in order for your HVAC system to breathe properly and function at peak performance, the ductwork needs to be opened and clear. Because air is constantly running through them, however, a lot of dirt and debris can accumulate inside of the air ducts, and the components can experience serious wear and tear. How do you combat the buildup of dirt and debris, and the damages that constant use can cause? With regular duct cleaning services from a reputable professional, of course!

Here’s a look at just some of the biggest reasons why hiring a Camden, NJ air duct cleaning company is so important.

Did you know that an estimated 40 pounds of dirt, dust, and allergens collect inside the average home each year? It’s true! Each time your HVAC turns on, small pieces of that debris get sucked up into the air ducts, circulate throughout your home, and pollute the air that you and your family breathe with irritants, such as dust mites. According to the American Lung Association, these microscopic, bug-like pests produce some of the most common allergens. Chronic exposure to dust mites over a prolonged period of time can cause serious adverse health effects on individuals who suffer from asthma, as well as those who are allergic to or sensitive to these pests. Other allergens can circulate throughout the air that pushes through your air ducts, too.

Routine air duct cleaning is one of the most effective ways to minimize the number of dust mites and allergens that you and your family are exposed to. A reputable Camden, NJ air duct cleaning company will thoroughly clean the ductwork, change the filters, and will inspect the air ducts to ensure that they are functioning properly. In other words, regular duct cleaning will significantly improve the indoor air quality and the health of your Camden County home.

Air quality isn’t the only thing that dirty air ducts will negatively impact; they negatively impact the cleanliness of your home, too. Whenever your HVAC system kicks on, the dirt, debris, and dust that accumulates in the ductwork loosens blows through the vents, and lands on the surfaces throughout your Camden County house. As you can imagine, as that gunk builds up on countertops, shelves, tables, floors, furniture, linens, and more, your Camden County home will look and feel dirty and dingy. Keeping up with all of that buildup will require a lot more cleaning.

Regular duct cleaning services performed by a reliable and experienced Camden, NJ air duct cleaning professional will make your home more sanitary. A reputable technician will use the most advanced tools and equipment, combined with proven techniques and strategies, to remove the built-up debris along with the interior of the ductwork. As a result, your Camden County home will look and feel a lot cleaner.

After being out for a while, when you return home, does a moldy, musty, or stale odor greet you? Do you notice unpleasant scents that turn your nose up whenever the AC or heat clicks on? Either way, dirty air ducts could be the source of the problem.

Dirt, debris, and dust that collect in your air ducts contain tiny odor-causing particles, and those odors can come from a variety of sources, such as food, smoke, pets, and dirty laundry. Whenever your HVAC turns on, those odor-causing particles will be stirred up and will blow out of the vents, creating an unpleasant aroma in your Camden County home. Regular duct cleaning services performed by a Camden, NJ air duct cleaning professional will help to make your house smell a whole lot fresher.

As the gunk that accumulates on the interior of your ductwork becomes thicker, circulation will be reduced, and as a result, your HVAC system will need to work harder in order to maintain the temperature of your Camden County home. The harder the system works, the more energy it has to use. The more energy your heating and cooling system uses, your utility bills – and your wallet – will suffer.

To improve the efficiency, health, cleanliness, comfort, and even the aroma of your Camden County home, contact the leading Camden, NJ air duct cleaning company: Apex Air Duct Cleaning and Chimney Services. With more than 40 years of experience under our belts and dozens of satisfied clients, you can count on our CSIA-, C-DET-certified technicians to deliver outstanding results. To learn more or to schedule an appointment, drop us a line right through our website, or give us a call at 732-314-7171. However you get in touch with us, our team of knowledgeable and friendly professionals are standing by and are ready to assist you with all of your duct cleaning needs.

Some information about Camden, NJ

Camden is a city in and the county seat of Camden County, New Jersey. Camden is located directly across the Delaware River from Philadelphia, Pennsylvania. At the 2010 U.S. Census, the city had a population of 77,344. Camden is the 12th most populous municipality in New Jersey. The Census Bureau’s Population Estimates Program calculated that the city’s population was 73,562 in 2019, ranking the city the 487th-most-populous in the country. The city was incorporated on February 13, 1828. Camden has been the county seat of Camden County since the county was formed on March 13, 1844. The city derives its name from Charles Pratt, 1st Earl Camden. Camden is made up of over 20 different neighborhoods.

In 1626, Fort Nassau was established by the Dutch West India Company at the confluence of Big Timber Creek and the Delaware River. Throughout the 17th century, Europeans settled along the Delaware, competing to control the local fur trade. After the Restoration in 1660, the land around Camden was controlled by nobles serving under King Charles II, until it was sold off to a group of New Jersey Quakers in 1673. The area developed further when a ferry system was established along the east side of the Delaware River to facilitate trade between Fort Nassau and Philadelphia, the growing capital of the Quaker colony of Pennsylvania directly across the river. By the 1700s, Quakers and the Lenni Lenape, the indigenous inhabitants, were coexisting. The Quakers’ expansion and use of natural resources, in addition to the introduction of alcohol and infectious disease, diminished the Lenape’s population in the area.

The 1688 order of the County Court of Gloucester that sanctioned ferries between New Jersey and Philadelphia was: ‘Therefore we permit and appoint that a common passage or ferry for man or beast be provided, fixed and settled in some convenient and proper place between ye mouths or entrance of Cooper’s Creek and Newton Creek, and that the government, managing and keeping of ye same be committed to ye said William Roydon and his assigns, who are hereby empowered and appointed to establish, fix and settle ye same within ye limits aforesaid, wherein all other persons are desired and requested to keep no other common or public passage or ferry.’ The ferry system was located along Cooper Street and was turned over to Daniel Cooper in 1695. Its creation resulted in a series of small settlements along the river, largely established by three families: the Coopers, the Kaighns, and the Mickels, and these lands would eventually be combined to create the future city. Of these, the Cooper family had the greatest impact on the formation of Camden. In 1773, Jacob Cooper developed some of the land he had inherited through his family into a ‘townsite,’ naming it Camden after Charles Pratt, the Earl of Camden.

For over 150 years, Camden served as a secondary economic and transportation hub for the Philadelphia area. However, that status began to change in the early 19th century. Camden was incorporated as a city on February 13, 1828, from portions of Newton Township, while the area was still part of Gloucester County. One of the U.S.’s first railroads, the Camden and Amboy Railroad, was chartered in Camden in 1830. The Camden and Amboy Railroad allowed travelers to travel between New York City and Philadelphia via ferry terminals in South Amboy, New Jersey and Camden. The railroad terminated on the Camden Waterfront, and passengers were ferried across the Delaware River to their final Philadelphia destination. The Camden and Amboy Railroad opened in 1834 and helped to spur an increase in population and commerce in Camden.