Get Started By Contacting us!

5-star reviews
Had apex appliance come to my home to service my dryer vent and chimney. There customer service was great and i couldn’t be more satisfied, I will definitely be using them in the future!

Do you need reliable, efficient, and affordable chimney sweeping services in Bordentown, NJ? Your search ends here! Apex Air Duct Cleaning & Chimney Services has been sweeping Burlington County chimneys for over 40 years, ensuring their safety and enhancing their efficiency. As a locally owned and operated, fully licensed and insured chimney service provider, our technicians are professionally trained and licensed.

When you choose us, you can take comfort in knowing that our professional chimney sweeps are Chimney Safety Institute of America (CSIA) certified to clean and inspect all aspects of your chimney system, from the chimney liner and the chimney cap, to the flue liner, to prevent chimney fires.

We use advanced techniques and high-tech equipment, adhering to strict standards to ensure your chimney is completely cleaned and functioning correctly and safely. No company can compare to Apex Air Duct Cleaning & Chimney Services when it comes to hiring chimney sweeping services in Bordentown, NJ.

Do you rely on your fireplace to heat your house? Do you use it solely for the ambiance that it creates? Whatever the case may be, there’s no doubt that the fireplace is one of the most beloved features of your Burlington County home; however, in order to ensure that it remains that way, it must be properly maintained. Routine chimney sweeping services are a vital part of that maintenance.

Of all the components of your fireplace, the chimney is one of the most important. It exhausts the smoke and excess heat that fires produce. It ensures a steady flow of oxygen, which fires need in order to burn.

Without the chimney, your fireplace wouldn’t function. Over time, however, a chimney gets dirty, and when that happens, the safety of the structure, your home, and your family will be compromised.

According to the National Fire Protection Association (NFPA), failure to clean heating equipment – including chimneys – is one of the leading causes of house fires. Clogged chimneys also increase the risk of exposure to hazardous fumes, such as carbon monoxide. Furthermore, when a chimney is dirty, the fires you burn won’t receive the oxygen they need to thrive.

In other words, keeping a chimney clean is extremely important, and the cleaning methods that are used to combat creosote buildup are important as well. But how do you know when you need to schedule an appointment with a Bordentown, NJ chimney sweeping professional? The following are some of the telltale signs that indicate it’s time to get in touch with a chimney sweep near you.

When it’s functioning properly, a flue will open and close with ease. If it’s sticking, and you’re having a hard time moving it, then that is a surefire sign you’re going to want to get in touch with a chimney sweep near you. There are several factors that could be causing the problem. The buildup of dirt and debris, or corrosion and rust caused by moisture exposure, may be preventing the flue from opening and closing.

A certified, experienced Bordentown, NJ chimney sweeping professional will perform a complete assessment of your entire chimney to determine the cause of the problem. Of course, they’ll thoroughly clean all components of the structure, including the flue.

No matter whether the flue issues are the result of dirt and debris buildup, corrosion, rust, or any other cause, a reputable chimney sweep near you will restore its function, ensuring that it is working properly.

Fires need oxygen to burn. A chimney not only exhausts the smoke, soot, and excess heat, but it also feeds the fires you burn with vital oxygen. When the chimney is clean (and the damper is opened), the fires you light in your fireplace should be strong and warm; if however, it’s dirty or obstructed, the fires you light won’t receive the oxygen they need to thrive.

A dirty chimney could be to blame if your fires aren’t burning as powerfully, aren’t producing as much warmth as they usually do, or start and peter out quickly. If you just can’t seem to get them started at all, check the flue to see if it’s opened. If it is and you’re still having issues with your fires, it’s time to schedule an appointment with a chimney sweep near you.

A reputable Bordentown, NJ chimney sweeping professional will use the most advanced tools and equipment to remove caked-on debris and any obstructions that may be blocking the chimney. When the job is finished, you’ll be able to enjoy strong, warm, and glowing fires.

Have you noticed that your chimney is making strange noises? Anything out of the ordinary sounding, such as banging, scratching, growling, chirping, or any other unusual noise? Your chimney may have been invaded by critters.

As a result of the structure’s ability to provide shelter, protection from predators, and protection from the cold, a wide variety of animals often choose to live close to chimneys, including raccoons, bats, mice, squirrels, and birds. As they enter, exit, and move around inside the chimney, the critters will bang into and scratch on the walls, and you’ll be able to hear the noises they make coming out of the walls and the fireplace. Obviously, you don’t want animals nesting in your chimney.

Not only is there a chance that they could make their way inside your Burlington County home, but they’ll obstruct the chimney and when you light a fire, their nesting materials (and the animals themselves) could ignite.

If you’re hearing unusual noises coming from your chimney, don’t ignore them! A reputable and experienced Bordentown, NJ chimney sweeping technician will determine if, in fact, critters have taken up refuge in the structure, and if so, they’ll humanely remove the animals, as well as their nesting materials and any other debris they may have left behind.

Get in touch with a chimney sweep near you to schedule an appointment for a certified chimney sweeping and thorough chimney inspection. Everywhere that critters or creosote can build up needs to be checked to reduce the risk of catching fire. 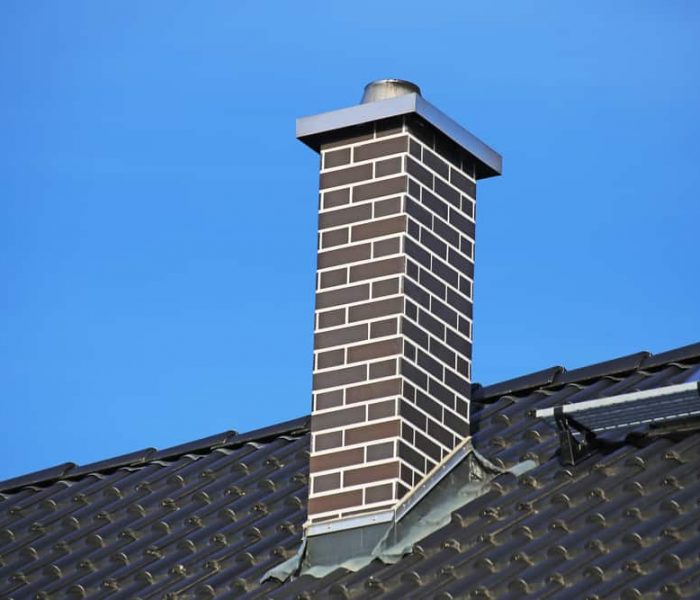 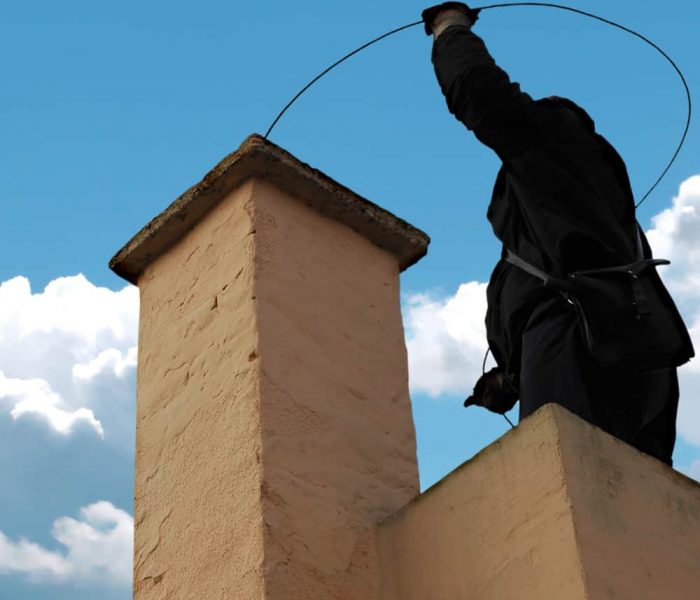 Looking for a Reliable Chimney Sweep Near You?

If you’re having any of the above-mentioned issues, or any other problem with your chimney – or if you just haven’t had it cleaned in a while – contact Apex Air Duct Cleaning & Chimney Services. The team of certified technicians at our locally owned and operated, fully licensed and insured Bordentown, NJ chimney sweeping company will thoroughly clean your chimney and will ensure that it’s functioning properly and safely.

To request a free price quote or to schedule an appointment, give us a call at 732-314-7171. When Apex Air Duct Cleaning & Chimney Services is on the job, you can feel confident knowing that you’ll receive the fastest, most efficient, and most affordable chimney sweeping services in Burlington County.

Thomas Farnsworth, an English Quaker, was credited with being the first European settler in the Bordentown area in 1682, when he moved his family up river from Burlington. He made a new home on the windswept bluff overlooking the broad bend in the Delaware River. The Farnsworth’s cabin was situated near the northwest corner of Park Street and Prince Street, perhaps where an 1883 frame house now stands. “Farnsworth Landing” soon became the center of trade for the region. Farnsworth is also the namesake of one of Bordentown’s main streets, Farnsworth Avenue.

Joseph Borden, for whom the city is named, arrived in 1717, and by May 1740 founded a transportation system to carry people and freight between New York City and Philadelphia. This exploited Bordentown’s natural location as the point on the Delaware River that provided the shortest overland route to Perth Amboy, from which cargo and people could be ferried to New York City.

By 1776, Bordentown was full of revolutionaries. Patience Lovell Wright, America’s first female sculptor, was creating wax busts in King George’s court in England. Later, however, Bordentown became a rabble-rousing hotbed. In addition to Joseph Borden’s son (also named Joseph Borden), who became a colonel during the war, patriots Francis Hopkinson (a signer of the United States Declaration of Independence), Colonel Kirkbride, Colonel Oakey Hoagland, and Thomas Paine resided in the area. Due to their well-published activity in Bordentown, the British retaliated. Hessians occupied the town in 1776, and the British pillaged and razed the town during May and June 1778.

Here are some chimney-related links:

A chimney sweep is specially trained to use brushes and rods to clean off creosote from in the fireplace. This is how the smoke chamber and firebox get cleaned.

What happens if you don’t sweep your chimney

Soot builds up inside the flue of a chimney. Due to this, black soot can even start to escape the chimney and reach walls in your home.

Who are chimney sweepers

Chimney sweeps are trained professionals equipped with the tools to perfectly clean out your chimney.